Professor Ed Mitchell (Auckland NZ) and I proposed a triple risk model for Stillbirth (see above) which is based on a SIDS triple risk model. The hypothesis for this model is that risk factors may inter-relate and may result in Stillbirth. Although any one risk factor may be insufficient to cause death, together they may produce a lethal combination, particularly if the fetus is vulnerable. Two risk factors that I have researched are sleep position and altered fetal movements:
​
<
>
Avoiding Back Sleeping
One potential fetal stressor for the vulnerable fetus is sleeping on your back. When pregnant woman are awake they are told to avoid resting on their back and great care is taken to avoid this position when women are in labour, having a c-section or even when the midwife feels the baby's position.
To date several studies have reported that when a mother settles to sleep on her back that her baby is at increased risk of stillbirth. See summary Table: 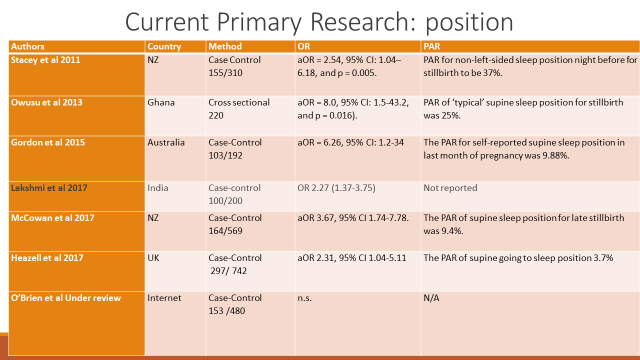 The 'Pathfinder' study: 25 pregnant women in late pregnancy wore a device called the Prenabelt to discourage supine sleep on one 'intervention night' and not on the 'control' night a summary of results is:

Time in bed   was not significantly different during intervention and control nights (P = .196, r= −.23). Median time spent supine during the intervention night was reduced from 48.3 minutes, to 28.5 minutes during the control night (P = .064, r = −.33). The difference in the proportion of time spent supine was significant (P = .039). There was no significant difference in objectively estimated sleep time (P = .651, r = −.07). Improvement was observed in both maternal and fetal parameters during the intervention night with an increase in median minimum maternal oxygen saturations (control = 91.6%, intervention = 92.4%, P = .006, r = −.42), fewer maternal oxygen desaturations (control = 7.1, intervention = 5.9, P = .095, r = −.26), and fewer fetal heart rate decelerations (control = 14.0, intervention = 10.4, P = .045, r = −.31) compared to the control night.
We concluded that our results provide preliminary evidence that an intervention to reduce supine sleep in late pregnancy may provide maternal and fetal health benefits, with minimal effect on maternal perception of sleep quality and objectively estimated sleep time. Further research to explore relationships between objectively determined maternal sleep position, maternal respiratory indices, and fetal well-being is warranted.
To read the paper go to:Warland J, Dorrian J, Kember AJ, Phillips C, Borazjani A, Morrison JL, O'Brien LM. Modifying maternal sleep position in late pregnancy through positional therapy: a feasibility study. J Clin Sleep Med. 2018;14(8):1387–1397
A decrease in frequency of fetal movement is undoubtedly one of the most common SYMPTOMS that something may be amiss with the unborn baby. However, we now know from several case-control studies that a decrease in strength, or a change in pattern, or a sudden burst of activity (described by the mother as “crazy”), are also ALL potential symptoms that the unborn baby MAY not be well.
For a 20 minute youtube summary about this evidence go to this youtube video https://youtu.be/vVW8E4psnDk
Or to read more about this research go to:
​​Heazell, AE, Warland, J, Stacey, T, Coomarasamy, C, Budd, J, Mitchell, EA & O'Brien, LM 2017, 'Stillbirth is associated with perceived alterations in fetal activity - findings from an international case control study', BMC pregnancy and childbirth, vol.17, no. 1, article no. 369, pp. 1-11.